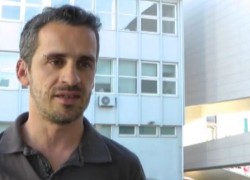 ♦ José Luis Peixoto is acknowledged as one of the most talented Portuguese writers working today. He covers a wide range of genres, with considerable success in his novels, poetry, and playwriting, as well as a musical collaboration with the band Moonspell. Peixoto’s novel, “The Implacable Order of Things,” won the José Saramago Literary Award. He has won many additional awards for his writing, which has been translated into over ten languages.

Peixoto’s style reflects an underlying sense of magical realism. For example, twins may be joined in more ways than a mere physical connection; or generations and time may form an unbroken circle of experience, against a backdrop of the vibrant natural world.  His rich poetic voice lends a depth to the characters and families he brings forward–farmers, carpenters, villagers, and shepherds pull us into their orbits in turn.  His books always provide a rich experience for the reader.

In this interview for the Portuguese American Journal, Peixoto speaks of his reading and writing interests and his musical inclination, as well as of art as a transversal form of expression.

Q: What type of books did you like as a child? Did anyone read books or poetry to you as you were growing up?

A: I was born in a very small village of the interior of Alentejo, not far from the border to Spain. There, I didn’t have much access to books. As a child I didn’t have any contact with poetry books. I would read whatever I could find. Back then, the itinerant libraries where very important to me. Once a month, a van would park in the main square of my village. I would be there waiting for it along with other kids. That’s where I truly became a reader.

Q: You write in so many different forms—prose, poetry, plays, and so forth.  What is your favorite genre at the moment?

A: Each genre has its own particularities and characteristics. Still, I would say that the novel is the genre that appeals the most to me in this moment of my life. But I also write poems, short stories and many other forms. And I enjoy the challenge that each form presents.

Q: What led to your involvement in the Antidote project and your work with Moonspell, the heavy metal band? Do you have any other musical projects underway right now?

A: I had been a fan of their work for a long while. Then, when the opportunity came, we arrived to the conclusion that we felt the same way about a possible joint project. Both I and Moonspell privilege the idea of doing something that was never done before. Also, they and I believe that the most important questions that art poses are transversal to all forms of expression.

Q: If a person who knew nothing about Portuguese literature asked you for a recommendation on its most important novels and books of poetry, which ones would you recommend?

A: I would probably recommend “Book of Disquiet,” by Fernando Pessoa (penned by his heteronym Bernardo Soares). It’s an amazing prose book, written by the most amazing Portuguese poet ever and one of the most intense figures of modernism worldwide.

Q: Which of your characters from your novels remains in your thoughts?

A: All the characters from my novels remain in my memory. They are like relatives that were very close at some point of my life. Still, there are some characters that are very special. Right now, I would choose the main characters from my last novel, called “Livro”. I have feelings for them, tenderness, not different from if they were real people.

Q: Your book, “Piano Cemetery” reflects different relationships across generations, and many reflections on time and its circular nature. Was this work autobiographical in any sense?

A: Yes. The first chapter describes the last day of my father’s life. That shows how personal this novel goes. Still, it’s not a memoir. Autobiography is intertwined with a story that is mostly fictional.

Q: Which philosophers and musicians have had an impact on your writing?

A: A lot. I feel that quoting names would be diminishing to them. I can’t recall all of them even if I tried really hard. All philosopher and musicians that touched me have an impact on my writing. Everything that I see or hear has that impact. Philosophy and music are to fundamental areas in what concerns their relationship with literature.

Q: In what ways does the landscape of the Alentejo region influence your novels?

A: In the way that Alentejo defines me in some of the most essential ways.

Q: In your poem “Alf” you describe a man who “pushes a supermarket cart on the streets/of los angeles and spends most of his time/drunk and annoying people. willie died of/cancer. kate moved to a trailer park in/the suburbs of detroit . .”  The vivid snapshots of these characters is reminiscent of prose poetry. Do you sometimes write in that form?

A: That little poem was an experiment of writing directly in English, something that I had never done before. That said, in fact, my prose and my poetry contaminate each other very often. I like that. The kind of literature that I like is always trying to destroy borders and rules.

Q: What is your impression of the United States and its literary environment?

A: I pay a lot of attention to the literature that is done in the United States. I would say that’s the literary scene that I follow the most, even more than the Portuguese.. There are many authors that I admire. As far as the country is concerned, I feel very comfortable whenever I have the chance to visit. Specially California and its laid back and welcoming ways.

Q: As I am sure you are well aware, the Portuguese royal court was transferred to Brazil in 1808 for a stay of many years.  How did that exile impact literature, either at that time or even now?

A: I don’t notice any impact of that historical aspect in today’s Portuguese literature or culture. I feel that as far as the relationship between Portugal and Brazil is concerned, there still is a very important effort that should be done to promote more closeness among both countries. Literature and culture in general have a fundamental role to play in that.

Q: In “The Implacable Order of Things,” you write: “There was a sun inside of a sun inside of a sun in my gaze, but I know that today, beyond me and beyond the utterly nocturnal light that I’ve become, a night went by, out there in the sky, out there in the room where I lie. I know that my wife and son slept soundly. I was tortured by monsters . . .” The anguished tone and the rhythm are reminiscent of Pessoa’s “Book of Disquiet.”  Are you conscious of his influence on your work?

A: As I said before, that’s a book that I admire a lot and everything that as touched me has helped me to shape my writings. That’s why that a comparison doesn’t surprise me. And it honors me, of course.

Q: The imagery of the olive tree in “The Implacable Order of Things,” especially in its connection to a particular day, is very effective and moving. Is the natural world a frequent source for your writing?

A: Yes. Being born in Alentejo, I was lucky to spend my childhood and teenager years very within the natural world. That’s an aspect that defines me as a person. I don’t think that I will ever lose that.

Q: What advice would you give to aspiring writers about the discipline and routine of writing?

A: I would advice then to focus exactly on that: on their writing. That’s what makes a writer, that’s the foundations of everything. Sometimes I see aspiring writers that think too much about the results of their writing, what they are going to get from it. That’s never a good idea. When you are working on your text, you have to focus exclusively on it. Then, each person has to find the most effective ways for his/her own nature.

Q: You must keep up a very intense pace with your myriad projects.  What activities help you rest and rejuvenate, given your schedule?

A: It’s very important that I find as much time as possible to think. Just to think actively. The more I enrich my inner world, the more I am prepared to face the speed and randomness of the outside world.

Q: The Portuguese-American poet Millicent Borges Accardi writes about the importance of Kale Soup as a family tradition in her recent work. What other symbols and traditions embody Portugal, from your perspective?

A: I believe that maybe the most important symbols that embody Portugal are invisible and abstract. The memory of certain voices speaking in Portuguese, pronouncing certain words is for sure one of them, but there are much more. The most intense ones are very personal, because Portugal is a very personal feeling that each Portuguese possesses.

Kathi Stafford is a contributor to the Portuguese American Journal. She is a member of the Westside Women’s Writer group. She has previously acted as poetry editor and senior editor for Southern California Review. Her poetry, interviews, and book reviews have appeared in literary journals such as Chiron Review, Nerve Cowboy, Connecticut River Review, SCR, and Hiram Poetry Review. Her poetry has been anthologized in Chopin and Cherries, as well as Sea of Change: Poems for Hitchcock.