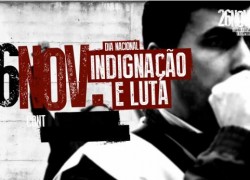 The Portuguese parliament approved Tuesday its 2014 state budget proposal. All opposition parties rejected the plan. The proposal was approved by the PSD-CDS majority ruling center-right coalition.

The voting extending the austerity measures was met with strikes and mass demonstrations by various labor organizations converging on parliament to stage a ‘National Day of Indignation, Protest and Struggle.”

The budget aims to save euros-3.9 billion ($ 5.3 billion), about 2.3 percent of gross domestic product, partly through cutting public sector salaries and pensions.

Accordingly, public sector workers will see their working hours raised to 40 hours a week from 35. Vacation days will be reduced from 25 days a year to 22, the same as in the private sector while retirement age for all workers will rise to 66 from 65 next year. Workers will also lose three days’ holiday a year.

“We do not understand how cutting workers’ wages is not but unconstitutional (…) with the increase on the number of working hours, lowering the hourly pay and lowering salaries,” said Ana Avoila, coordinator of the Civil Service Trade Union Federation.

Finance Minister, Maria Luis Albuquerque, said that “Unfortunately we are still in a situation of crisis and emergency which demands exceptional measures.” The spending plan will bring a third straight year of austerity.

In 2011, Portugal requested a euro-78 billion bailout to the International Monetary Fund and European Union to be met next June.