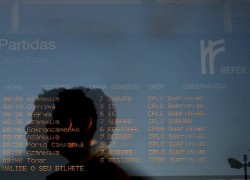 Commuters and travelers across Portugal will begin feeling the impact of a transportation strike staged to start Monday at the evening rush hour by train engineers at CP, the national railway network.

CP spokeswoman Ana Portela said Monday that the 24-hour strike scheduled for Tuesday would force the cancellation of about 81% of the scheduled 841 trains, LUSA reported.

A court has ordered the drivers to maintain “minimal services” of at least 162 trains, about 19% of the full schedule.

The engineers, who went on strike on Christmas and New Year’s, are protesting disciplinary actions by the CP administration against workers who participated in earlier strikes in protest against new regulations regarding overtime work and work on holidays.

Portuguese transport workers have been at the forefront of anti-austerity measures for several months, fearing salary cuts and job losses. A general strike was call by CGTP, the country largest labor union, for March 22.

The general strike, the second in the last four months,  is in protest against worsening labor legislation and the austerity measures being implemented by the center-right goverment of Prime Minister Passos Coelho.

Last May, Portugal agreed on a 78bilion-euro ($104 USD billion) emergency bailout loan with the European Union, and the International Monetary Fund.