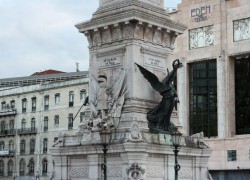 The Portuguese government opted to end with the two public holidays of October 5th and December 1st in order to ensure numerical symmetry with the cut in religious holidays.

“For the Church, it was highly important to ensure symmetry (…) and we agreed with the proposal,” said Álvaro Santos Pereira, the Economy Minister, adding that the two religious holidays to be cut “will be defined by the Church Commission and then that decision will be conveyed within the framework of the Concordat.”

Santos Pereira went on to explain the dates chosen as there were “not many more alternatives”, given an unwillingness to target the holidays associated with the Portuguese revolution on 25th April, Labor Day on 1st May or Portugal Day on 10th June.

The minister said that the government’s intention was actually to boost the importance of Portugal Day to “to strengthen pride in being Portuguese” and the “unity necessary to overcome the current crisis.”

The proposals will be discussed with social partners before the changes to the labor code are put to parliamentary vote.

However, Raquel Henriques, President of the History Teachers Association, was first out of the block expressing disapproval and stating it was a holiday that “not even the dictatorship had dared touch,” in an indication of widespread opposition.