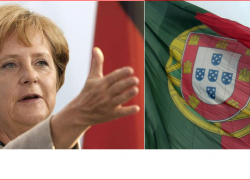 The head of the German government will also be the guest speaker at the opening of an economic forum in the Centro Cultural de Belém (CCB), in Lisbon, and will visit the headquarters Autoeuropa in Palmela. On her visit, Merkel will be accompanied by a delegation of German entrepreneurs.

The visit of the head of the German government to Portugal is seen by both governments as a demonstration of solidarity, trust and support of Germany for Portugal’s effort to meet her current financial challenges.

Merkel’s visit to Portugal has been classified by the Portuguese Center for Security, Organized Crime and Terrorism (OSCOT) as one of “high risk” for the Chancellor, and will be monitored at the highest level by Portugal’s security services, according to a source in the organization.

Security services in Portugal are expecting an increase in street protests during her visit and fear that some protests might “degenerate in violence.”

Felipe Pathé Duarte, the spokesperson for OSCOT, told Lusa that “most likely” the level of social protest in the streets will increase during Merkel’s visit.

“Most likely, the level of social contestation will increase to a higher a level, trying to draw the attention of Angela Merkel to the Portuguese situation. This can degenerate into violence,” he said.

“We are going through a difficult time in which all the conditions are met for this to happen,” said Duarte, stressing that Portugal “has had no tradition of violent social protest” as in Greece, Spain or Italy.