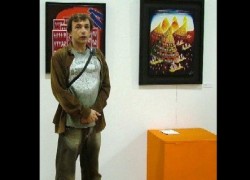 The exhibit, running from March 22 through April 26, is the continuation of the itinerant collective series promoted by the “International Surrealism Now” project comprising of variety of artworks, created through different techniques and media, such as drawings, paintings, photography, digital art and sculpture.

In 2010, Santiago Ribeiro founded the “International Surrealism Now” project, a collective exhibits series dedicated to showcasing Surrealism as an art form. Last year, in June, he was invited to participate in the “Fantastic Realism” exhibit, an international collective promoted by the LuminArte Gallery of Dallas, featuring local and international artists.

Born in Coimbra, Portugal, Santiago Ribeiro, 49, attended art classes at the Escola Avelar Brotero and Escola Superior de Educação of Coimbra.  He has organized and participated in numerous individual and collective art exhibitions in Portugal and abroad. His work is represented in several private collections as well as in the Collection of Contemporary Art of the National Museum Machado de Castro and in the Bissaya Barreto Foundation in Coimbra, Portugal. He is affiliated with United Photo Press.

Based in dreams and visions, Ribeiro’s metaphoric surrealist imagery surprises, puzzles and triggers mixed feelings.  (See Photo Gallery). His paintings have been described as “complex compositions illustrating deep concerns about modern society and its individual and collective behavior.”

In this interview for the Portuguese American Journal, Santiago Ribeiro speaks of his development as a surrealist painter, Surrealism as an art form and his “International Surrealism Now” initiative.

When did you start painting?

I started painting as a child and continued experimenting mostly with primary colors. It all began after my father brought home a library of 40 art books with illustrations from the Middle Ages throughout the classics of the Renaissance to the masters of Impressionism and Surrealism and other contemporary modern artists. At the time, I couldn’t read the books but I was fascinated by the imagery. I remember being particularly captivated by the fantastic allegories of Hieronymus Bosch as well as the impressionist and surrealist art forms. Studying those illustrations was my first painting lesson because they inspired me to start painting on my own. 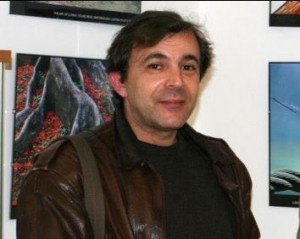 What is your background training as a painter?

I consider myself a self-taught artist.  Actually, I was only sixteen when I produced my first oil painting. Since then, painting became my profession and I started selling my paintings to make a living. I attended a couple of art schools but I dropped out because I enjoyed painting more than going to classes. It was difficult to coordinate school and work. Yet, although I was self-taught, I consider that attending art classes was very helpful to my artistic development.

How did you come to identify with Surrealism?

How has Surrealism evolved into your painting?

Surrealism allows for absolute unlimited unrestrained freedom. Surrealist painters tend to absorbed all kinds of influences from all kinds of art forms. It also allows for individuality and diversity. Each one of us ends up developing our own unique style, creating original paintings that are truly distinctive. Like most surrealist painters, I have developed my own distinctive technique and style. Yet, because we all share common traits, we end up being labeled as  “surrealist” artists.

What does the “surreal” mean to you as an artist?

Surrealist imagery draws from dreams and visions allowing the unconscious to express itself. As an artist, I feel compelled to create dreamlike imagery emerging from the stream of unconsciousness.

Do you have a reference or someone who has influenced you?

Hieronymus Bosch has always been an important reference to me. He has inspired and influenced me since I was a child and started experimenting with painting.

Is the “surreal” a means to an end in itself for you?

It is not a means or an end. It is a process.  It all starts with a dream, a vision or a thought. It is a creative process that happens free from preset ideas. In my particular case, it happens as it happens when it happens. I follow no rules.

What fascinates you the most about Surrealism?

I don’t know. But, because you have asked, I would say it is all about freedom. I feel totally free to create whatever I feel like. That’s what fascinates me.

What most inspires your creativity?

Surrealist aesthetics taps the subconscious through the free association of images and thoughts. It is a creative process which comes from deep within, very much influenced by the real and the unreal in which dreams play an import role. Dreams are based in reality as reality is based in dreams. Everything is connected. There are no boundaries. I may also feel inspired by a vision, a movie, a painting, a book or poem I just read. Music also inspires me. Everything intersects and interconnects.

What are the recurrent themes in your work and why?

The human form is definitely a recurrent theme in my paintings. Other recurrent themes are the yellow and red as dominant colors. But, if you ask me “why”, I would not be able to answer. It just happens that way.

What medium do you most often use?

I use oil on canvas exclusively.

Could you describe your artistic process?

Some surrealists are more descriptive while others are more abstract in their narratives. In my case, I envision what I want to represent and I try to make it happen. Yet, it takes technique and skill to give form to that visualization. I must say that more often than not I am not able to represent what I have envisioned. It is part of the creative process to be surprised with the end result.  I often find myself bemused by my own creations which become revelations to me. Sometimes, when I look at an old painting of mine, I feel surprised by what I see – like I am seeing it for the first time. I find myself experiencing the same sense of revelation as any other person seeing the painting for the first time. 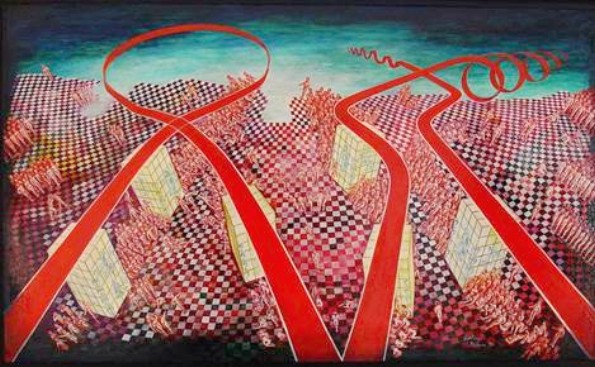 Many have defined Surrealism is an art movement set in the beginning of the 20th century. How do you explain that the movement continues to thrive, over a century, across the globe?

Surrealism existed before and after the 20th century.  It belongs to all ages and cultures past, present and future. Unlike other art forms, Surrealism has survived the test of time because it is tied to dreams. To dream is inherent to the human condition and Surrealism is the creative process that best serves the human need to represent dreams and visions in a continuum with little variations. In the 20th century there were attempts made to framework Surrealism as an aesthetic art form. The effort failed to materialize because Surrealism is about freedom of expression. It can’t be constrained to time, culture, ideology or aesthetics. Surrealism will prevail as long as there is the human need to express oneself spontaneously in freedom with creativity.

Where did you get the idea for your project “International Surrealism Now”?

The idea came about when I realized the power of the internet to communicate and connect with fellow artists and the public. Through the internet, I found out we could organize projects collectively with local institutions and groups worldwide. We started working with local artists promoting inclusive group events open to diverse artistic expressions such as poetry, music, multimedia and dance events. Our first group initiative took place in 2008 when we organized an international collective exhibit at the Casa Museu Bissaya Barreto, in Coimbra. This event led to  broader initiatives and to the creation in 2010 of the “International Surrealism Now” project.

Your “International Surrealism Now” project has promoted exhibits in over 30 countries. A new exhibit is opening in Dallas, Texas, March 22. Why Dallas?

Last year, Romanian-American Magi Calhoun, an artist affiliated with the our project, proposed my participation at the “Fantastic Realism” exhibit, an international collective promoted by the LuminArte Gallery of Dallas, Texas. Following that exhibit, American Surrealist Shahla Rosa proposed the realization of a collective exhibit at the LuminArt Gallery bringing together Portuguese and American surrealist artists which we titled “Luso-American Surrealism of the 21st Century.” 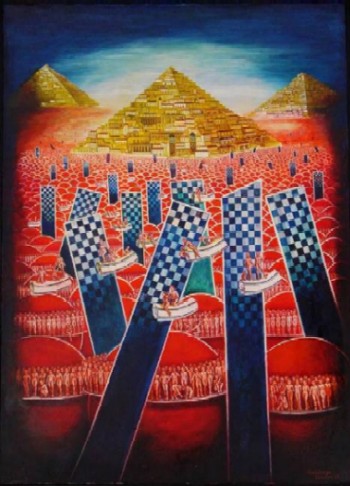 Is Surrealism in Portugal any different from any other forms of Surrealism?

There isn’t anything unique to Surrealism in Portugal that I am aware of. However, because we are all influenced by our environment, Portuguese surrealist painters will use references explicit to their environment that one can easily identify. As an example, I have used Coimbra, the city where I was born and where I live, as a reference in many of my paintings. Another reference is Condeixa-a-Nova, the town where I spent time as a child and where I did my first painting. I have also used elements from Conimbriga, the nearby ancient Roman city in ruins. Other easily identifiable references in my paintings include elements from the Portuguese architecture and from our national monuments.

Do you have one favorite painting in your personal portfolio?

I can’t say I have one favorite painting. Most of my paintings are sold quickly and I may not see them again. What I can say is that I have two particular paintings that I am much attached to and that I will not sell. One was painted in 1997 and the other in 1998. They must mean something special because I just can’t let them go. They give me a deep feeling of accomplishment and the sense that I will never be able to create anything like that ever again. So, I hold on to them.

How do you know when a work is finished?

It happens when I get a sense of completion and closure and I feel the urge to start something new.

To watch the slideshow, click on any thumbnail and than
click on Next or Back buttons.
Click on any picture to enlarge to full screen or to return to regular size.

LuminArte Gallery, conveniently located in the Dallas Design District, showcases contemporary award-winning artists, as well as bright emerging talent. Specializing in art placement and interior design consultation, the gallery presents collectors, designers and corporate clients with a diverse array of artwork in a variety of media, styles and techniques. Representing over forty artists from more than a dozen countries, LuminArte continues to embrace the local art community by hosting an artist in residence program, and by providing workshops and continuing education opportunities.

The first “International Surrealism Now” collective exhibit was held in Coimbra, Portugal, in 2010, dedicated to the city and sponsored by the by the Bissaya Barreto Foundation. The project has been recognized by artists in 27 countries.

(*) Carolina Matos, is the founder and editor of  the Portuguese Portuguese American Journal online. She was the Editor–in-Chief for The Portuguese American Journal in print, from 1985 to 1995. From 1995 to 2010, she was a consultant for Lisbon based Luso-American Development Foundation (FLAD). She graduated with a Bachelor’s Degree in Liberal Arts and a Master’s Degree in English and Education from Brown University and holds a Doctorate in Education from Lesley University. She is also an adjunct professor at Lesley University where she has taught undergraduate and graduate courses. In 2004, Carolina Matos was honored with the Comenda da Ordem do Infante D. Henrique, presented by Jorge Sampaio, President of Portugal.