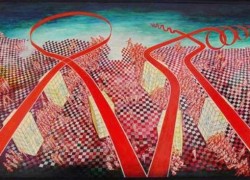 The exhibit, running January 21 through February 16, 2016, is the continuation of the itinerant collective series promoted by the “International Surrealism Now” project comprising of variety of artworks, created through different techniques and media.

An free opening reception for the exhibit takes place 5-6 p.m. January. 21 in the second-floor gallery at the MSU Welcome Center. Refreshments will be provided. Regular gallery hours are 9 a.m.-5 p.m., Monday-Friday, as well as by appointment.

The event is promoted by the ‘International Surrealism Now’ project founded by surrealist painter Santiago Ribeiro, who has organized and participated in numerous individual and collective art exhibitions in Portugal and abroad.

Lori Neuenfeldt, the university art department’s coordinator for gallery and outreach programs, described surrealism as a visual expression of dreams or play with reality. Spanish artist Salvador Dali (1904-89)—whose melting clocks are pop-culture icons—remains the best-known representative of the creative movement dating from the early 20th century, she added.

Additionally, visitors will have opportunities to meet artists Shahla Rosa of California and Joe MacGown of Starkville during a casual talk at noon on the 22nd, also in the gallery.

Other featured artists in the exhibit include Jay Garfinkle of Michigan; France Garrido and Olga Spiegal of New York; Victor Lages, Santiago Ribeiro and Francisco Urbano of Portugal; K.D. Matheson of Nevada; Patrick McGrath Muniz of Texas; and Laurie Burton, also of Starkville.

In addition to the MSU College of Architecture, Art and Design’s art department and Holmes Cultural Diversity Center, the exhibit is made possible with support from the Portugal-based International Surrealism Now, as well as the local Chalet Arts supply store and frame shop.

In 2014 and 2013, similar exhibits were promoted in the United States by the  ‘International Surrealism Now’ project at the LuminArte Gallery of Dallas, in Texas, featuring works by Portuguese and north American artists.

Additional information on the current exhibit is available at 662-325-2973 or LNeuenfeldt@caad.msstate.edu.