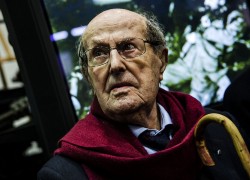 Portuguese film director, Manoel de Oliveira, died today at age 106. Starting his career in 1927, he directed his first film in 1931.

Oliveira was considered the world’s oldest working film director and the only filmmaker whose active career has spanned from the silent era to the digital age.

He direct more than 30 feature films and dozens of short films and documentaries and achieved broad international recognition.

Portuguese Prime Minister Pedro Passos Coelho said in a statement that Oliveira “was a central figure in the international projection of Portuguese cinema and, through films, of Portuguese culture and its vitality.”

President Anibal Cavaco Silva said in a televised address that “Portugal has lost one of the greatest figures of its contemporary culture.”

Distinguished with many awards, he was the recipient in 2014 of the French Légion d’Honneur, (Grand Officier de la Ordre National de la Légion d’Honneur), established in 1802 by Napoléon Bonaparte, bestowed by the President of the Republic of France. The award honors “by way of exception” illustrious individuals with distinguished careers.

His latest work, “O Velho do Restelo” [The Old Man of Restelo] was screened in Lisbon on his 106  birthday, after having premiered at the 2014 Venice Film Festival.