Arts: Nathan Oliveira to be memorialized at Stanford University – California 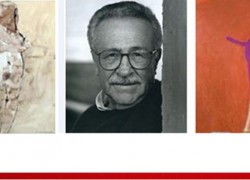 The late Portuguese-American artist, Nathan Oliveira, will be memorialized at Stanford University with the creation of the Windhover Contemplative Center.

The new center will display four large oil paintings of Oliveira’s Windhover series inspired by birds in flight. Oliveira began working on the series in the 1970s, which took a lifetime of art to complete.

The 4,000-square-foot building, estimated at $5.32 million, will include an exhibit space and an outdoor gathering area. The break ground ceremony is scheduled for in June, 2013. The building will be completed in the spring 2014.

An internationally acclaimed artist, Nathan Oliveira was an American painter, printmaker, and sculptor, born in Oakland, California to Portuguese parents, both immigrants from the Azores. He taught at Stanford for three decades where he retired from teaching in 1995. He died in 2010 at 81.

Oliveira graduated from San Francisco’s George Washington High School. He attended college in Oakland; first at Mills College, where he attended a class taught by Max Beckmann, and later at California College of the Arts, where he received a BFA in 1951 and an MFA in 1952. Besides Stanford University, Oliveira taught art at several colleges, including the California College of the Arts.

He held exhibitions in New York, London, Melbourne, Paris and Stockholm. The San Francisco Museum of Modern Art alone owns more than 30 examples of his work.

Oliveira’s many honors include an award by the American Academy and Institute of Arts and Letters and election to the American Academy of Arts & Sciences. He was named as the first holder of the Ann O’Day Maples Professorship in the Arts in 1988. He was the recipient, in 1999, of the Commander of the Order of Henry the Navigator from the President of Portugal.

Stanford University is an American private research university situated in the northwestern Silicon Valley,  CA, with a majority of enrollments coming from graduate and professional students. The university is organized into seven schools, including academic schools of Humanities and Sciences and Earth Sciences as well as professional schools of Business, Education, Engineering, Law, and Medicine. Stanford has a student body of approximately 7,000 undergraduate and 8,900 graduate students.