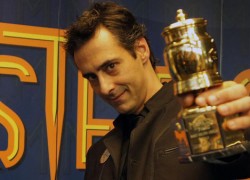 Established in 1953, the Grolla d’Oro is one of the oldest and most prestigious arts awards distinguishing the best international artists in film, television, journalism, music and magic.

Luis de Matos, 43, is a world-class professional magician. Born in Mozambique, at the age of five he moved with his parents to Portugal. He began making guest appearances on television in 1990. Two years later he was the host of his own television series Isto é Magia! [This is Magic!].

In 1999, he was named Magician of the Year by the Hollywood Academy of Magical Arts. In 2000, he was awarded the Mandrake D’or  by the French Society of Magicians. In 2010, in collaboration with David Britland and Marco Tempest, he organized the Essential Magic Conference, the first and only (so far) online magic conference with the participation of over 2000 people from 75 countries.