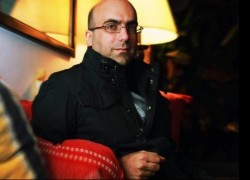 The Department of Portuguese and Brazilian Studies, at Brown University, Providence, RI, is hosting a conversation and lunch event with Portuguese writer and artist, valter hugo mãe, to be held on Wednesday, April 23, at 12pm.

Born in Angola in 1971, valter hugo mãe is the penname of Valter Hugo Lemos, a Portuguese language writer and artist who achieved public recognition after being awarded, in 2007,  the José Saramago Prize in Literature for the novel O remorso de Baltazar Serapião. In 2012, he won the Portugal Telecom Literature Award for the novel A máquina de fazer espanhóis.

A poet and prolific fiction writer, he is also an accomplished musician and visual arts artist  who contributes to various literary, arts and music publications in Portugal.  A publisher, he has edited a number of literary anthologies for Quasi Press and co-edits the literary magazine Apeadeiro.

The event, co-sponsored by the Camões Institute and the Luso-American Development Foundation (FLAD), will take place in the George Monteiro Room, Department of Portuguese and Brazilian Studies, 159 George St. Providence, RI.

The talk and lunch are open to the public. Those planning to attend are advised to call Kate Beall (in advance) at 401 863 2695 or email kaitlin_beall@brown.edu