AIPE: Joana Vasconcelos recipient of the 2012 Personality of the Year Award – Portugal 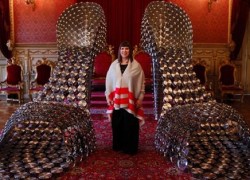 Portuguese artist Joana Vasconcelos is the recipient of the 2012 Personality of the Year Award from the Foreign Press Association (AIEP) for her remarkable career.

This is the 24th year the AIEP prize has been awarded to a Portuguese personality or institution that has helped promote Portugal internationally. The award was voted on at the end of last year by the association’s 57 members representing over 20 countries.

Last year, Joana Vasconcelos became the first woman and the youngest artist to exhibit at the Palace of Versailles, in France. The exhibit topped the ranking of the five most visited art exhibitions in Paris, France, in the past 50 years.

Currently, some of her works on exhibition at the Versailles is on display at the National Palace of Ajuda in Lisbon where it has seen by about 20,000 visitors in just two weeks.

Of Portuguese descent, Joana Vasconcelos, 42, was born in Paris, France, but is currently based in Lisbon, Portugal. The artist came to the public’s attention for her display at the 2005 Venice Biennale that greeted visitors to the Arsenale.