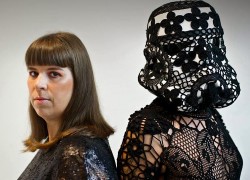 Curator Natasha Howes said the event would be “the most ambitious” exhibition by Vasconcelos in the United Kingdom. Manchester Art Gallery is visited by about 400,000 people every year.

Titled “Britannia” the exhibit will feature textile work that has been designed to be hung in a cascade down the main staircase of the Victorian building and displayed along with the “Valquírias” series which take the shape of colored tentacles in different fabrics with details in lace and crochet. The artist started creating the iconic textile pieces in 2004.

This latest work was inspired by an earlier piece called “Contamination” which was exhibited in 2008 at the Pinoteca in São Paulo, Brazil, and then reconfigured three years later for the exhibit at the Grassi Palace in Venice, Italy.

According to Howes, the first contacts to organize the exhibit at the Manchester Art Gallery were established in 2011. “We thought it would be interesting to bring it to Manchester because of the city’s history of the textile trade”, she said. Following the Industrial Revolution, Manchester became the one of the world’s main centers for the cotton textile industry.

Praising Vasconcelos’ ingenious creative spirit, Howes said: “It is a very accessible work, very immediate, on a large scale and full of color, but later, with more attention, we get to see the message it carries”.

Vasconcelos’s work consists of transforming everyday objects in inventive and unexpected ways. She creates traditional clichés of her Portuguese cultural heritage with humor, provocation, irony and sensuality. Her unconventional, “bigger than life” baroque installations are symbolic and imaginary.

In January of last year, the work of Joana Vasconcelos was presented in the United States at the “How to Tell the Future from the Past” group exhibit at the Haunch of Venison Gallery, in Manhatan, New York, NY.

Of Portuguese descent, Joana Vasconcelos, 43, was born in Paris, France, but is currently based in Lisbon, Portugal. The artist came to the public’s attention for her display at the 2005 Venice Biennale that greeted visitors to the Arsenale.