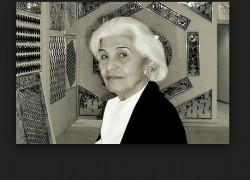 The Guggenheim Museum in New York is opening an exhibition on Friday, March 13, of the work by Iranian painter, Monir Shahroudy Farmanfarmaian, organized by the Serralves Museum of Porto, Portugal.

Entitled ‘Infinite Possibility Mirror Works and Drawings’ the exhibit covers work by Farmanfarmaian, in the period between 1974 and 2014, featured last October in Porto in an exhibit organized by Suzanne Cotter, the Serralves Museum curator.

Most of the work selected for the Guggenheim Museum exhibit belongs to the private collection of the artist and has not been seen publicly since the 1970s, including some of Farmanfarmaian’s earlier work only seen at the exhibition organized by Denise René, in Paris and New York, in 1977.

Monir Shahroudy Farmanfarmaian was born in Iran, in 1924, where she studied at the University of Tehran. In the 1940s, during the height of the Abstract Expressionism era,she studied in New York at Parsons in the New School for Design and Cornell University.  After returning to Iran in the late 1950s,  the 1979 Islamic Revolution sent her back to New York where she remained until 2004. Although her experience abroad has impacted her work, her most consistent inspiration has been Islamic architecture and decoration. Currently Farmanfarmaian lives in Tehran.

The exhibit at the Guggenheim Museum will remain open until  June 30, 2015.