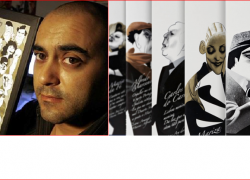 Portuguese illustrator, André Carrilho, was invited to give his personal touch to the Vanity Fair’s March issue devoted to Hollywood.

Carrilho, who has collaborated with Vanity Fair for the last eight years, will follow after Miguel Covarrubias, who did the original illustrations in 1933, and Robert Risko, who upgraded the magazine in 1995.  For the Hollywood special issue, Carrilho took it a step further by filming his entire process, from freehand drawing to Photoshop rendering.

André Carrilho, 38, was born in Lisbon, Portugal. Since 1992, he has worked as a professional designer for some of the most important domestic and international newspapers and magazines.

A designer, illustrator, cartoonist, animator and caricature artist, Carrilho, has won many national and international prizes and has shown his work in group and solo exhibitions in Brazil, China, Czech Republic, France, Portugal, Spain and USA.

In 2002, he was awarded the Gold Award for Illustrator’s Portfolio by the Society for News Design (USA), one of the most prestigious illustration awards in the world.