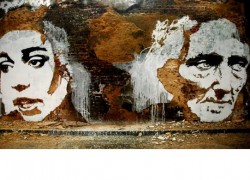 Portuguese artist, Alexandre Farto  (Vhils), one of the biggest names in international street art, will be represented  at the first Life is Beautiful Festival taking place October 26-27 in Las Vegas (NV).

The interactive art programming, complete with theatrical, visual and street art projects is comprised of three separate initiatives, bringing artists out of their traditional studios, galleries or theaters and into the streets of Downtown Las Vegas.

Other street art artists participating include D*Face (UK), Alexis Diaz (AKA La Pandilla from Puerto Rico), Interesni Kazki (Ukrane), Zio Ziegler (San Francisco), Ana Maria (Houston) and Aware (Las Vegas). Creation of these original pieces, which include murals, stencils by The Stencil Network (NYC) and giant show posters by Bicicleta Sem Freio (Brazil), will begin the week prior to the festival and be completed live on site.

“For many years ‘art’ has been synonymous with Downtown Las Vegas,” says managing partner Joey Vanas. “What Life is Beautiful intends to do during our festival weekend and beyond is bring national and international attention to our local artists and further the growth of Downtown Las Vegas as a serious art community.”

The Life is Beautiful Festival is being developed by Aurelian Marketing Group in partnership with Another Planet Entertainment, MAKTUB Marketing and Downtown Project.