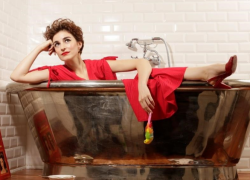 Although this is not the first time the Portuguese singer performs in the United States, it is the first time she is performing in New York and Fall River.

In the New York East Village she will be appearing in the prestigious ‘Drom.’ In Fall River she will be on stage at the ‘Narrows Center for the Arts’ one of the most recognized East Coast entertainment venues.

Redshoes is a Portuguese indie music artist who sings most of her songs in English. She will present her own musical style of fusion of pop, with country-folk and blues.

In both concerts, she will present songs from her latest album ‘Life Is A Second Of Love’ published last year, as well as songs from her previous albums ‘Golden Era’ (2008) and “Lights & Darks’ (2010).

The Arte Institute is a New York based non-profit organization that promotes the Portuguese art and culture and offers a creative environment for Portuguese artists in the areas of visual arts, literature, music, dance and film. The goal is to foster inter-cultural innovative dialogues between the New York artistic community and Portuguese artists.