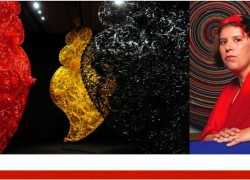 The art of Joana Vasconcelos will be presented at the “How to Tell the Future from the Past ” group exhibit, opening January 17 at the Haunch of Venison Gallery in Manhatan, New York, NY.

Besides Joana Vasconcelos, participating artists include Jiechang Yang, Justin Mortimer, Patricia Piccinini and Eve Sussman. The collective exhibit will be on view until March 2, 2013.

The exhibit includes works of painting, sculpture and video by the five artists, suggesting “the trajectory of humanity not as a continuous advancement, but as an endless return to a base nature,” says the announcement.

Vasconcelos’s work consists of transforming everyday objects in inventive and unexpected ways. She reveals the traditional clichés of her Portuguese cultural heritage with humor, provocation, irony and sensuality.  Her unconventional, “bigger than life” baroque installations are symbolic and imaginary.

Of Portuguese descent, Joana Vasconcelos, 42, was born in Paris and is currently based in Lisbon, Portugal. The artist came to the public’s attention for her display at the 2005 Venice Biennale that greeted visitors to the Arsenale. Her work is included in prestigious public and private collections, and most recently she exhibited at Château de Versailles in 2012. Vasconcelos has been selected to represent Portugal at the 2013 Venice Biennale. She was the first woman to ever hold an exhibition at Versailles Palace, France. Read more >>