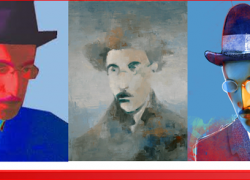 The Arte Institute, in partnership with Teatro do Bairro, is launching the Pessoa in New York Program, scheduled for April 13 through April 17, to take place in New York City and New Jersey.

The program is comprised of series of cultural events celebrating the life and work of Portuguese modernist poet Fernando Pessoa. It includes poetry readings, film screenings of  The Film of Disquiet, by director João Botelho, and lectures by writer and Fernando Pessoa’s translator Richard Zenith.

Fernando Pessoa  (1888–1935) was a Portuguese poet and writer who wrote through a multitude of literary personalities. He created heteronyms with developed personalities, biographies, jobs, habits, and attitudes. His heteronyms sometimes quoted and interacted with each other and other people. One of the most translated and quoted world poets, Pessoa’s work was published posthumously.

Based in New York City, the Arte Institute is a non-profit organization dedicated to producing and disseminating artists and projects of contemporary Portuguese art. The event is co-sponsored by Luso-American Development Foundation (FLAD), the Consulate General of Portugal (Newark ), the Camões – Instituto da Cooperação e da Língua, and the Poets House’s Literary Partners Space Sharing Program.

April 13
Launching of the “Pessoa in New York” Program with a poetry reading at Sonnabend Gallery (Arte Institute´s Anniversary cocktail). (Sold out)

April 14 , 5 PM
Screening of “The Film of Disquiet” at the Museum of Modern Art (MoMA) with the presence of director João Botelho and Richard Zenith, translator and scholar of Pessoa´s works. (Tickets)

April 15 , 8 PM
Screening of the movie “The Film of Disquiet” at Anthology Film Archives with the presence of director João Botelho and Richard Zenith. (Tickets)

April 16 , 4.30 PM
Screening of the movie “The Film of Disquiet” at Rutgers University in New Jersey, followed by a talk with director João Botelho.