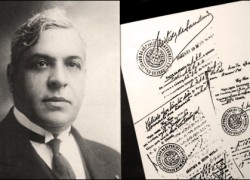 Sousa Mendes was Portuguese Consul stationed in Bordeaux, France, during the Second World War, who, in June of 1940, issued Portuguese visas of safe conduct to over 30,000 at-risk refugees, including an estimated 10,000 Jews.

In 1966, Sousa Mendes was named “Righteous Among the Nations” by the State of Israel. In 1986, the U.S. Congress proclaimed him a hero. Later, Portuguese President Mário Soares apologized to the Sousa Mendes family, and the Portuguese Parliament recognized him posthumously with the rank of Ambassador.

In June 2012, the City of San Jose presented an exhibit based on the life of Sousa Mendes, honoring him and remembering the refugees he saved. The exhibit, titled “These are my people! The Story of Aristides de Sousa Mendes” and organized by the Sousa Mendes Foundation, tells the story of Sousa Mendes and the refugees he saved. Some visa recipients were prominent, such as Salvador Dali, Hans and Margret Rey (authors of Curious George), the Rothschild family, the Habsburg family, and the entire Belgian cabinet. But most were ordinary families escaping the horrors of Nazi persecution. This outstanding exhibit will be on display at Beth David on October 14, 2012.

Following the dedication ceremony, there will be a showing of the movie, Disobedience: The Sousa Mendes Story and viewing of the exhibit, These are my people! Refreshments will be served. The entire Bay Area Jewish and Portuguese communities are cordially invited to attend this very interesting, informative and important event.

An entrance to Congregation Beth David in Saratoga bears the marker “Raoul Wallenberg Way,” erected in May 1988, to commemorate the Swedish diplomat’s heroic efforts to save Jews during World War II. Several years later, in October 2009, Beth David held a memorial ceremony honoring Chiune Sugihara, a Japanese diplomat to Lithuania who saved thousands of Jews threatened by the Holocaust. A private drive at the synagogue was named in honor of this diplomat’s life-saving deeds.

Aristides de Sousa Mendes, was the Portuguese Consul in Bordeaux, France, during World War II. He saved an estimated 30,000 lives, the majority of them Jews, when Paris fell to the advancing Nazi army in June of 1940. Helped by his wife and children, Sousa Mendes issued visas to as many refugees as he could, without regard to nationality or religion. The operation has bee described by the Holocaust scholar Yehuda Bauer as “perhaps the largest rescue action by a single individual during the Holocaust.”

He issued the visas against the Portuguese government orders for which he was recalled and subjected to disciplinary action. A lawyer by training, after being dismissed from is diplomatic post, he was disbarred by Dictator Salazar and not allowed to practice law. A father of 14 children, he died destitute and in obscurity in 1954. Read more >>
For more information please contact Harriet Fernandez, at 408-223-7835 or harrietrenee@sbcglobal.net

Via The Sousa Mendes Foundation