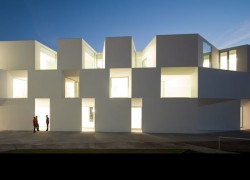 Projects by Portuguese architects won four of the top prizes out of 14 categories in the 2014 Archdaily Building of the Year Awards, organized by the online publication, according to the list published on Thursday.

In the Health Architecture category, the architects Francisco and Manuel Aires Mateus were awarded the top prize for the new building for the Santa Casa de Misericórdia in Alcácer do Sal.

In the Refurbishment Architecture category, the winner was Tiago do Vale’s project revamping the Chalé das Três Esquinas, a house in Braga.

The redesign of the Braancamp Freire School at Pontinha in Lisbon won in the Education Architecture category; it was the work of CVDB Arquitectos.

The winners were selected from more than 3,500 candidates from around the world, in 14 categories. Voting was online.

According to Archdaily, each of the winning projects “is unique in several aspects, in their spatial qualities and materials, yes, but also in terms of what they represent for the communities they serve. Each of these projects, in their own special way, solve unique social/environmental/economic challenges, and in so doing impart knowledge and inspiration to architects around the world. This is exactly our mission. So thank you, thanks for being a part of this amazing process, where the global voices of architects unite into one, strong, intelligent, forward-thinking message.”

Archdaily was founded in 2008 as an international platform for information in the field of architecture. The website boasts more than 300,000 daily visits, making it the leading site in the field.

The 2014 ArchDaily Building of the Year Awards, is a peer-based, crowdsourced, architecture award where the collective intelligence of 60,000 architects filter and recognize the best architecture featured on ArchDaily during the past year.