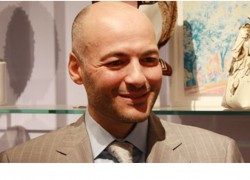 Born in Vila Franca do Campo, Sao Miguel, Azores, at the age of six Victor Luís emigrated with his family to California. Shortly after, the family resettled in East Providence, Rhode Island.

Victor Luís has been the President and Chief Commercial Officer of Coach, Inc. since February 2013. Prior to his current role,he served as a member of the Coach’s leadership team for seven years, holding a variety of key international leadership roles.

Before joining Coach Inc., from 2002 to 2006, Luís was the President and Chief Executive Officer for Baccarat, Inc., running the North American operation of the French luxury brand. Earlier in his career, he held marketing and sales positions within the Moët-Hennessy Louis Vuitton (LVMH) Group.

Coach Inc. was founded in 1941 in Manhattan, NY,NY. There are over 600 Coach stores in the United States and Canada. Coach’s products are assembled in about 60 manufacturing facilities in 14 countries including the US, Europe and Asia.