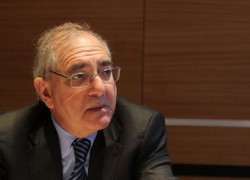 Rui Machete, the former President of the Luso-American Development Foundation (FLAD), is a senior leader of the ruling Social Democrat Party (PSD). He had served as Minister of Justice and Minister of Defense before being appointed Deputy Prime Minister of the IX Constitutional Government (1983-1985).

The reshuffle, half way through the legislature, followed a political crisis and ended with an agreement by PSD leader Passos Coelho and CDS-PP leader Paulo Portas.

The Prime Minister has also replaced Economy Minister Alvaro Santos Pereira, an independent, with economist Antonio Pires de Lima (CDS-PPP). The newly appointed  ministers will be sworn in on Wednesday.