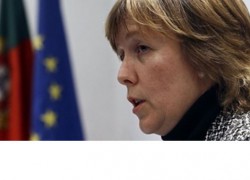 She replaces Vitor Gaspar who resigned under pressure from the leaders of the opposition, labor unions, the business community and the general population.

Gaspar’s draconic austerity measure policies, and his failure to improve the financial crisis, have contributed for his unpopularity and resignation. Under Gaspar’s watch, Portugal’s economy has entered its third year of recession with an unemployment rate reaching 18%.

Gaspar has failed to repair the country’s finances since Portugal was forced to negotiate a €78 billion ($104 billion) bailout in 2011 with the International Monetary Fund (IMF), the European Central Bank and its EU partners, aimed to reducing the national deficit.