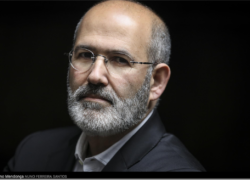 Pope Francis has appointed Cardinal José Tolentino de Mendonça, 68, as a member of the Congregation for the Causes of Saints.

Cardinal José Tolentino de Mendonça, a distinguished theologian, a poet and prolific writer, has served as Archivist and Librarian of the Holy Roman Church.

Born in Funchal, Madeira, he attended the Catholic University of Portugal, where in 1989 he completed a degree in Theology.

Back in Funchal, he taught at the Diocesan Seminary and ministered at the Nossa Senhora do Livramento parish. In 1995 he was transferred to Lisbon, where he served for five years as chaplain of the Catholic University. In 2001, in Rome, he served as rector, for two years, in the Pontifical Portuguese College.

He became professor of New Testament and Aesthetic Theology in the Faculty of Theology of the Catholic University of Portugal (2004-2018). He edited the journal of theological studies “Didaskalia” (2005-2012) and directed the Centre for Studies of Religions and Cultures (2012-2017) of the same Athenaeum and was rector of the chapel of Nossa Senhora da Bonança (2010-2018).

Appointed in 2011 consultor of the Pontifical Council for Culture, the following year he became vice-rector of the Catholic University of Portugal and was a visiting professor in Brazil at the Catholic universities of Pernambuco and Rio de Janeiro, and also at the Faculty of Philosophy and Theology of the Jesuits in Belo Horizonte.

A published poet, Cardinal Tolentino de Mendonça is also the author of numerous articles and books in the theological and exegetical fields.

An expert in the relationship between literature and theology, in 2014 he represented Portugal in the World Poetry Day and for several years he has edited a weekly column in the Lisbon based newspaper Expresso entitled “What clouds are.”

In 2018 Pope Francis appointed him archivist and librarian of the Holy Roman Church, elevating him to titular see of Suava, with the dignity of archbishop. Member of Pontifical Councils for Culture, he was proclaimed Cardinal by Pope Francis in October 5, 2019.

He had received his episcopal ordination in Lisbon, from the Cardinal Patriarch Manuel Clemente e Faría, and chose as his motto Considerate lilia agri, [Consider the lilies of the field], taken from the Sermon on the Mount (Matthew 6: 28).

The Congregation for the Causes of Saints [Congregatio de Causis Sanctorum] is the congregation of the Roman Curia that oversees the complex process that leads to the canonization of saints.