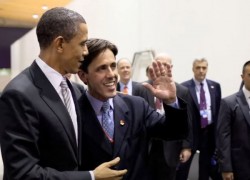 The Obama Foundation will house a presidential library, museum and headquarters offices, to be built in Jackson Park, on the South Side of Chicago, by 2021. The foundation is expected to launch a major fundraising operation after President Obama leaves office in January, 2017.

“In the year ahead, the Obama Foundation will continue the important work of creating a presidential center that inspires citizens and communities to take on big challenges,” Simas said in a statement.

In 2009-2010, Simas served the Obama administration as White House political director. In 2013, President Obama appointed Simas as his Assistant to the President and Deputy Senior for Communication and Strategy.

He worked with senior advisers David Axelrod and David Plouffe as director of polling and opinion research for the Obama re-election campaign and subsequently in several other capacities including  assistant to the president.

A native of Taunton (MA), Simas worked his way up becoming a member of the City Council and Bristol County’s Registrar of Deeds. In 2007, he was appointed Deputy Chief of Staff to former Massachusetts Governor Deval Patrick with oversight of policy development and legislative affairs.

David Simas, 45, is a graduate of Stonehill College (1992) and Boston College Law School (1995). His parents immigrated as children from Portugal. His mother, Deolinda Matos Simas, is from Abela, Alentejo, mainland Portugal. His father, António Simas, is from Faial da Terra, São Miguel, Azores. He lives in Washington with his wife Shauna and two daughters, Payton and Rowan.