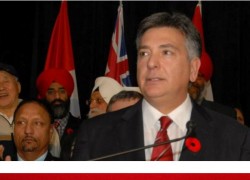 Sousa, the former Citizen and Immigration Minister, was the MPP for Mississauga South since 2007. He also served as Minister of Labour from 2010 to 2011, after having been Parliamentary Assistant to the Minister of Economic Development and Trade.

In January, Sousa sought the leadership of the Ontario Liberal Party but dropped out of the race to endorse rival Kathleen Wynne who became officially Premier of Ontario on Monday.

On January 26, Wynne won the party leadership at the Liberal Party Leadership Convention, in Toronto, to become the first female Premier in Ontario’s history.