Appointed: Berta Cabral to be sworn Secretary of State of Defense – Portugal 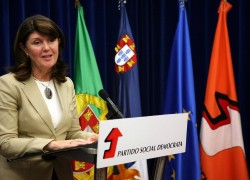 Social democrat (PSD) Berta Cabral, 60, the former mayor of Ponta Delgada city, and former candidate for President of the Government of the Azores, was appointed Secretary of State of Defense by Portugal’s central government. She will be sworn on Monday, April 21.

Cabral was defeated by the Socialist Party (PS) candidate, Vasco Cordeiro, 39, who was elected Regional President of the Azores, on October 14, 2012, with an absolute majority of 49% of votes. Currently, she is a deputy and vice-president of the Legislative Assembly of the Azores.