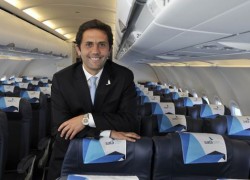 The President of Azores based SATA Group, António Gomes de Menezes, was elected board member of the European Regions Airline Association (ERA).

SATA Group runs the state-owned SATA Air Azores, a company operated by the Regional Government of the Azores and TAP Air Portugal. It became a signatory of the European Regions Airline Association (ERA) and the International Air Transport Association(IATA) charters in 1980 when it became a public company.

SATA Air Açores was distinguished by ERA with the “Airline of the Year 2011/2012” award which was given based on the results achieved with the replacement and renewal of the fleet with new Bombardier aircraft.

SATA International,  a concessionary of SATA Air Azores, has been connecting the Azores and mainland Portugal for more than 37 years in addition to a number of destinations in Europe and Brazil. SATA offers air services to Lisbon, Madeira and Porto from the Azores. Inter-island flights are offered to each of the islands in the Azores as well.

Established in 1941, SATA Group took off on the 15th of June 1947, when it made the first commercial flight. The company is comprised of five enterprises including two airlines, two tour operators and an airfield management division.

António Gomes de Menezes, 41, was born in Ponta Delgada, Azores. A former Assistant Professor at University of the Azores, he has appointed CEO of SATA Air Azores in 2007. He holds a Ph.D. in Economics with distinction, from Boston College, USA, MA. He completed an Advanced Management Program at Catholic University, Portugal, and at the University of Gothenburg, Sweden. He also holds a BS in Economics from the New University of Lisbon, Portugal.