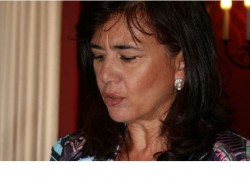 Anabela Rodrigues was sworn Portugal’s Minister of Internal Administration in charge of the police and immigration services, replacing Miguel Macedo who resigned November 16 amid a corruption scandal.

A political newcomer, she is the first woman to occupy the post and the fourth woman minister of the current center-right  government headed by Prime Minister Passos Coelho.  The other female ministers include Paula Teixeira da Cruz , Minister of Justice; Maria Luís Albuquerque, Minister of Finance; and Assunção Cristas, Minister of Agriculture and Sea. The Portuguese cabinet comprises a Prime Minister a Deputy Prime Minister and 13 ministries.

Rodrigues,60, has Ph.D. in criminal law and was, until her appointment, a Professor at the Faculty of Law at the University of Coimbra. She is a member of the Supreme Council of Magistrates, and was director of the Center for Judicial Studies (2004 – 2009).