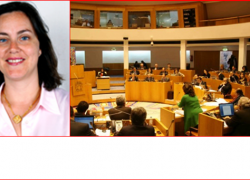 Ana Luís,36, was appointed President of the Regional Legislative Assembly of the Azores by the Socialist Party (PS) leadership, replacing Francisco Coelho.

A native of Faial island and an economist by training, Ana Luis will be the first woman holding the position. She will preside to a legislative body of 57 representatives of which one third are women.

The Socialist Party (PS) won the legislative elections held in the Azores on October 14, with an absolute majority of 49% of votes winning 31 out of a total of 57 parliamentary seats.

The 57 representatives elected to serve the 10th Legislative Assembly were sworn today in a ceremony held in the Azorean Parliament located in Horta city on Faial island.

Cordeiro was challenged in the legislative elections by Berta Cabral, the former Mayor of Ponta Delgada city, the social democrat candidate (PSD) in opposition, who garnered 33% of votes, winning 20 parliamentary seats for her party. The Christian Democrats (CDS-PP) won third place with 6% of ballots, winning 3 parliamentary seats.

General Information on the Azores