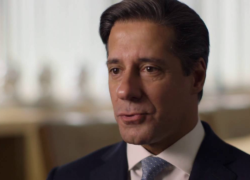 Born in Lisbon, Portugal, he immigrated to the United States at age 17, as an undocumented immigrant and day laborer, to become one of the nation’s most experienced and admired school district leaders. He arrived without knowing English, working as a busboy and construction worker in NYC and South Florida.

“Carvalho learned English as a young adult and quickly worked his way up from construction and restaurant jobs as he attended Broward Community College. He later won a scholarship to Barry University,”  writes The Los Angeles Times

Once homeless, Carvalho  said, “I am the poor kid from Portugal whose first job in this country was as a dishwasher, second job was as a day laborer,” reported the Tri-City Herald.

Carvalho leaves the fourth-largest school system in the nation, which serves about 350,000 students, for the second largest in the country, with more than 500,00 students. He has led Miami-Dade’s public school district since 2008.

Named Superintendent of the Year in 2014, by the National Superintendents’ Association, Carvalho has been credited with raising its academic and financial standing.

“We’ve pulled this district from financial bankruptcy, from academic bankruptcy, where dozens of schools were rated ‘D’ or ‘F,’ where graduation rates were at 58%,” he said. The district says its current graduation rate is 93% and has no D or F schools.

In 2014, he was he honored by President Barack Obama and U.S. Secretary of Education Arne Duncan at a White House ceremony, during the National Teacher of the Year announcement.

Other honors include the Hispanic Heritage Education Award and the 2013 National Child Labor Committee Ron H. Brown Award; he has been acknowledged as Visionary Leader of the Year by the Greater Miami Chamber of Commerce and South Florida’s Ultimate CEO; and he has been recognized for Leadership in Government by the Miami Chapter of the American Institute of Architects. He is a member of Florida’s Council of 100 and the Honorable Order of Kentucky Colonels. Mexico warded him with the “Othli Award,” the highest award for a civilian living outside of Mexico.