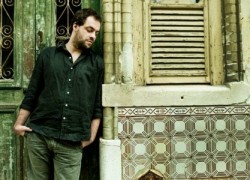 The City University of New York is hosting a Fado concert, featuring Portuguese performer Antonio Zambujo, as part of its Live@365 series of world music concerts.

Antonio Zambujo, winner of the “Amália Rodrigues Foundation Prize for Best Male Fado Singer” has garnered tremendous acclaim not only from media such as Le Monde, which has described him as “the angelic voice of Fado,” but also from an international audience.

Zambujo, who also plays guitar, will be accompanied by Ricardo Cruz on double bass, Luis Guerreiro on Portuguese guitar and Jon Luz on cavaquinho.

Zambujo is part of a new generation of younger artists who have contributed to the revival of Fado and to the rising prominence of the male voice on stage.

His style is characterized by a sense of tradition and a keen desire for rejuvenation, brilliantly demonstrating how music can be both faithful to the past and eminently contemporary.
﻿

Deeply rooted in the luscious chants of Canto Alentejano, the region from which he hails, and Brazilian music, Zambujo sings with great soul.

Fado (destiny or fate) is the heart of the Portuguese soul and is the most widely recognized music of Portugal. Like Memphis Blues, Cuban Son, Colombian Cumbia, or Argentinean Tango, so Fado is Portugal. Over the past two centuries, the genre has evolved from a folk tradition into an internationally recognized art form, undergoing several changes along the way.

Live@365 is a series of world music concerts, curated by Isabel Soffer, in the Baisley Powell Elebash Recital Hall, a remarkably intimate, 180-seat concert theater at 365 Fifth Avenue, The Graduate Center of the City University of New York.

The inaugural season of Live@365 comprises six concerts, all of which take place on a Tuesday at 7:00 P.M. The series will feature standout artists and exclusive projects that best suit Elebash Hall’s unique size, ambience and acoustics. In just six evenings, the series will present a wide range of music, both traditional and contemporary, from Europe, Africa, Australasia and the Middle East. 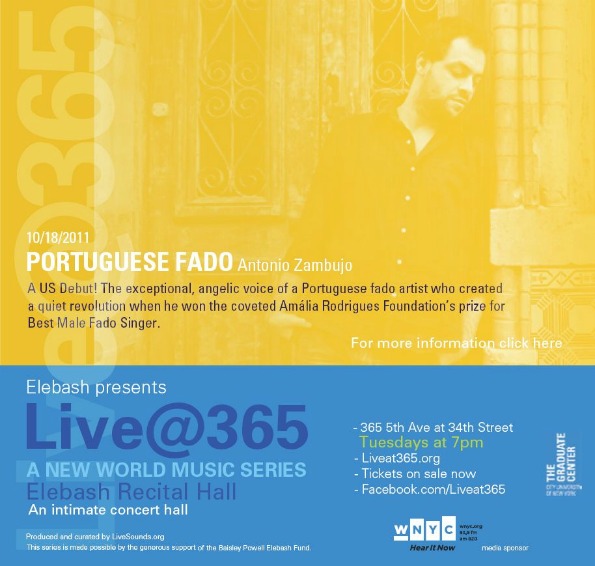