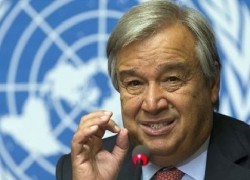 As we raise glasses to the notion of peace and goodwill on Earth, more realistic hopes are centred on Portugal’s António Guterres who takes office as United Nations Secretary-General on New Year’s Day.

One of the few things top leaders across this bitterly divided world seem to agree on is that Guterres is the best man for the herculean task of curbing warfare, deprivation and poverty.

On accepting the world’s toughest diplomatic job, Guterres this month laid out his priorities.

“My main goal is to play a contributing, non-partisan and positive role in solving regional and international crises, to relieve as much as it is possible the pains and sufferings of human beings across the globe.”

Given the on-going conflicts across the Middle East, the political turmoil in Europe and concerns everywhere about Donald Trump becoming President of the United States, Lisbon-born Guterres needs all the support he can get.

Among the first of the well-wishers was Russia’s Ambassador to the UN Vitaly Churkin who said Guterres was obviously the best choice for the job. Promoting greater cooperation between Russia and the United States is one of Guterres’ key aims.

Chinese President Xi Jinping extended a warm welcome to Guterres on meeting him in Peking and strongly praised the UN as “the most universal, representative and authoritative intergovernmental organisation.” Among other things, the president and Guterres were united in furthering the Paris agreement on climate change.

Iran’s permanent chief representative at the UN, Gholam Ali Khoshroo, has assured Guterres that “the Islamic Republic of Iran will not spare any efforts in cooperating with the UN for spreading peace and stability in the region.”

Other ambassadors at the UN headquarters in New York have emphasised their hopes of a resumption of dialogue and de-escalation of tensions between India and Pakistan, and between the Israelis and Palestinians.

In discussions with Guterres in her capacity as Chairperson for Landlocked Developing Countries, Zambia’s Ambassador and Permanent Representative to the United Nations Dr. Mwaba Kasese -Bota has urged the new UN chief to mobilise support and global partnerships towards addressing the special needs of the least advanced countries.

After a meeting with Guterres in the White House, outgoing President Barack Obama spoke of his confidence in the new secretary-general and praised his “extraordinary reputation.”

Although a familiar figure in high political and diplomatic circles, Guterres is still not well known among ordinary folk in the world at large.

A brilliant student, he graduated in Lisbon in 1971 in physics and electrical engineering. Having embarked on an academic career, he joined the Portuguese Socialist Party after the 1974 ‘Carnation Revolution’ and switched to full-time politics. He was Prime Minister of Portugal from 1995 to 2002.

From 2005 he served for ten years as UN High Commissioner for Refugees, heading an organisation that towards the end of his tenure had a staff of more than 10,000 working in 126 countries, providing help to more than 60 million people in desperate need.

Guterres is recognised not only as a man of true grit, but also of great integrity and humility. Originally inspired by the “shock” he experienced as a student volunteer working in the slums of Lisbon, he said that as High Commissioner he felt “privileged” to have contributed to “the most vulnerable of the vulnerable.”

Now aged 67 and a devout Catholic who speaks fluent English, French and Spanish, Guterres is heading into the unknown as a uniquely-placed bridge-builder and peacemaker.

The outgoing US Secretary of State John Kerry perhaps summed it up best when he said of the new secretary-general: “he is the right man at the right time.”

This time last year a major news organisation ran the headline: “Europe’s Year From Hell — and 2016 Could Be Even Worse.”

How right they were.

The same could be said right now, not only about Europe but the whole world in 2017. 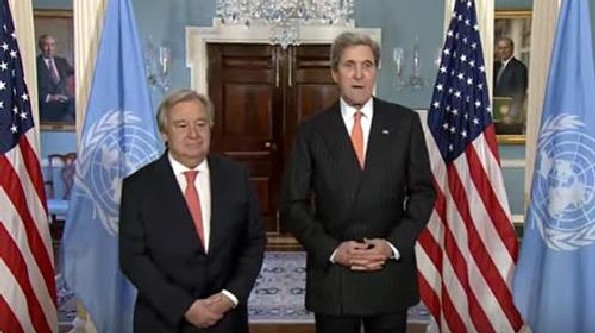 Secretary Kerry met with the honorable Antonio Guterres at the State Dept. in Washington. Mr. Kerry told the new elect UN Secretary General: ‘I am extremely pleased to welcome here the new secretary-general of the United Nations , Antonio Guterres, who brings very, very special and important skills to this job at this particular moment in time.’