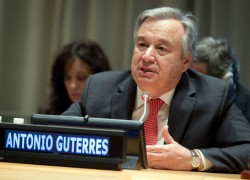 Ban Ki-moon, the current UN Secretary-General, will step down at the end of the year after two five-year terms. A total of nine candidates, of which four are women, have applied for the position.

Over the course of three days, from April 12 to 14, each candidate was given two hours each to speak in front of the General Assembly. The Security Council is expected to make a final decision by September.

According to the election process, the Secretary-General shall be appointed by the General Assembly upon the recommendation of the Security Council. The Secretary General will be appointed for five years, with the option of reappointment for a further five-year-term.

In January, the Portuguese government proposed António Guterres as its candidate to the post of United Nations Secretary General based on his outstanding political career and international experience.

António Guterres, 66, a career politician who is the former UN High Commissioner for Refugees (2005-2015), was Portugal’s Prime Minister (1995-2002), served as president of the European Council (2000) and was president of the Socialist International (1999-2005). As UN High Commissioner, he headed one of the world’s largest humanitarian organizations with a budget over USD $6.8 billion (2015) and more than 9,000 staff working in 123 countries providing assistance to over 46 million displaced people worldwide.

Related on the web