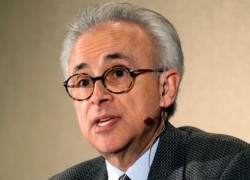 Portuguese neuroscientist, António Damásio, 66, was awarded the title of Doctor Honoris Causa by the University of Coimbra (UC), Faculty of Psychology and Sciences of Education, for his lifelong scientific research on behalf of the understanding of the biological origin of consciousness and the role emotions play in social cognition and decision-making.

Born in Portugal in 1944, Damásio started his academic career at the University of Lisbon School of Medicine before immigrating to the United States in 1975.

The author of many books, he recently published Self Comes to Mind: Constructing the Conscious Brain, translated in many languages in which he attempts to explain the idea of self in neuroscientific terms. His work has also had a major influence on current understanding of the neural systems, which underlie memory, language and consciousness.

He is the recipient of many awards, namely the Fernando Pessoa Prize, the Prince of Asturias Award, the Ipsen Prize, the Reenpaa Prize in Neuroscience, the Arnold Pfeffer Prize, and the Nonino Prize.

He is the founder and director of the USC Brain and Creativity Institute and David Dornsife Professor of Neuroscience at the University of Southern California, and Adjunct Professor at the Salk Institute.