Angra: Pope Francis invited to visit the Azores in 2017 – Terceira 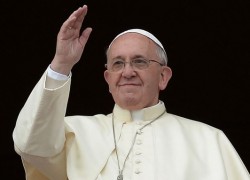 The Bishop of Angra do Heroísmo, Terceira, Azores, António Sousa Braga, revealed today that he intends to invite Pope Francis to visit the archipelago as part of the announced papal visit to mainland Portugal, in 2017, to participate in the 100th anniversary of the Marian Apparitions in Cova da Iria, Fatima.

The Bishop of Angra do Heroísmo also revealed that he has a scheduled meeting with Pope Francis, in Rome, on September 7, as part of a general papal audience with Portuguese bishops.

The visit, led by the Patriarch of Lisbon, Cardinal Manuel Clemente, President of the Portuguese Episcopal Conference, comprises of a delegation of about 40 members, including bishops and other Catholic leaders.

The Lisbon diocese was established in the fourth century, and in 1716 was elevated to the status of a patriarchate by Clement XI.

Pope Francis will visit the United States September 22-27, 2015. The complete program for the Apostolic Journey was released by the Vatican on June 30, 2015.  All times listed here are Eastern Daylight Time .