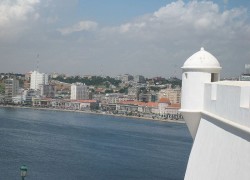 Angolan immigration authorities have detained 42 Portuguese nationals working without proper documentation and plan to deport them by the end of this week, reported Lusa News Agency.

The 42 had been employed without Angolan working permits and would be deported by the end of the week after the company pays a fine, Milagros said.

Authorities uncovered the scheme, he added, when a PREBUILD officer was detained at Luanda international airport with 32 improperly stamped Portuguese passports.

“We suspect a lot of other people are around here under similar schemes, but we’re determined to fight this kind of situation and put an end to these mafias,” Milagres said.

Following Monday’s announcement, Portuguese Socialist Representative Paulo Pisco said the difficulty in obtaining work visas for Angola “can cause some kind of tension.”

Pisco asked the newly appointed Portuguese Foreign Minister Paulo Portas to clarify what “diplomatic efforts” were in progress to stop the expulsions and what the government was doing to make it easier for Portuguese citizens to get visas for the former Portuguese colony.

According to new estimates, the former Portuguese colony is now home to over 90,000 Portuguese citizens.