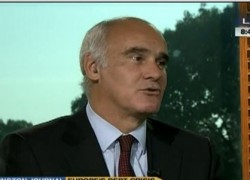 João Vale de Almeida, the Head of the Delegation of the European Union to the United States, was interview September 30, by Peter Slen for the Washington Journal on C-Span.

He spoke about the expansion of the European Financial Stability Facility in order to cope with potential financial crises in Italy and Spain. He also talked about the impact of the Greek debt crisis on Europe, the U.S., with references to Portugal and the global economy. He responded to telephone calls and electronic communications.

The European Financial Stability Facility (EFSF), headquartered in Luxembourg City, is financed by members of the Eurozone to combat the European sovereign debt crisis by providing financial assistance, through the European Investment Bank, to Eurozone states in economic difficulty.

On his interview, Vale de Almeida said that there are no easy quick fixes for the current global crisis and that the situation in Europe is no exception.  He said, “What you see in Europe today is a full mobilization of all the tools, all the actors, all the instruments we have at our disposal to deal with this crisis.”

He also said that he fully rejects the notion that the current crisis in Europe is being met with complacency by the European leadership. He said, “I want people to understand that Europe is s not a country, they are 27, and that these are complex mechanisms.” — and he added — “There are no quick fixes for these complex problems. Not in Europe, not in the United States either. No quick fixes for a very complex situation. What we need is determination. We need to keep on the right track and I think Europe will survive.”

He holds a degree in history from the University of Lisbon and has studied journalism and management in the United States, France, Japan, and the United Kingdom.

Prior to his appointment in Washington, he served as the Director General for External Relations at the European Commission, the European Union’s executive body.

He presented his credentials to US President Barack Obama at a White House ceremony on August 10, 2010.