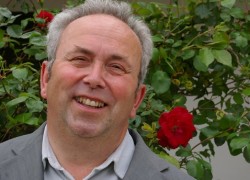 Charles Hills, who was convicted of plotting to have the lover of his Portuguese mother killed, is back behind bars having lived openly for several years in the eastern Algarve as a fugitive from UK justice.

Originally sentenced at the Old Bailey in London to seven years imprisonment but released after serving only two and a half, the British writer broke the terms of his parole license and absconded.

He moved into the three-bedroomed house in the Algarve village of Altura that had been at the root of his decision to have his mother’s lover killed. She owned the house and while well into her seventies lived there with Flávio Rosa, a Portuguese gardener and odd-job man 30 years her junior. Married, with four children, Rosa resisted eviction following her death in 2003.

After years in the Algarve interspersed with trips to others parts of mainland Europe, Hills returned to England for a six-week visit in December 2013. He arrived via an overnight ferry from the Hook of Holland to Harwich in Essex.

“I thought I might be arrested on landing, so I had a slap-up three-course meal on the boat, costing almost forty pounds, one of the most expensive and one of the best meals of my life,” he wrote in his blog.

“Then I was up for a walk on deck, a leaf through the free copies of the Spectator, and an excellent night’s sleep. At half-past-six in the morning I approached the mean and sleepy-looking male customs official at Harwich.

It was an example not only of Hills’ way with words, but his audacity and wry sense of humor.

Entering the UK undetected didn’t work the second time around.

Friends, including the British author Geoffrey Elborn, were expecting Hills to arrive back about the 21st of last November. Only just before Christmas did they discover that police had boarded his plane and arrested him on arrival at Gatwick Airport.

“He was taken to Lewes Prison, where I wrote and had a cheerful letter from him saying he was quite happy there,” said Elborn.

Hills has since been transferred from Lewes in East Sussex to Rochester Prison in Kent. Elborn says he and other friends have not been able to arrange any visits because slots in the visiting rooms have been fully booked.

Apart from tightly controlled personal visits, the contact rules allow prisoners to make but not receive phone calls, and to receive but not send emails.

“Charles is more or less resigned to being inside until 2016 and I think that he was advised not to appeal,” said Elborn who had a phone call from Hills about two weeks ago.

“If he did appeal, there would be a chance that his sentence would be increased and, if reduced, he would be given conditions which would probably deprive him of any chance to go abroad and he would be forced to remain in the UK until any new parole term expired. As he has nowhere to live in the UK, he might as well see it through in prison.”

Hills, 59, was born in London where his mother, Maria José dos Reis, a young, post-war émigré from a peasant community near Mafra, worked for many years, first as a maid and eventually as a silver-service waitress. She returned to Portugal in 1983 at the age of 60.

After her death in 2002, Charles, her utterly devoted only child, became convinced that Flávio Rosa had exploited confusion caused by Alzheimer’s and persuaded her to alter her will so he could continue to occupy the Altura house.

A legal battle ensued. Eventually the Portuguese courts overturned the will and Rosa was required to move out, but not before Hills’ bungled efforts to hire hitmen.

The only person hurt in his attempts to arrange a murder and disposal of the body was Hills himself. On admitting guilt at the Old Bailey he told the court he was “not a natural born killer.”

Indeed not. Charles was a much respected literary figure. Under the name C.A.R. Hills he had written books, edited the journal PEN News and contributed to other British publications including Prospect magazine, the Guardian and the New Statesman.

When asked a few years ago in the Algarve if he worried about being re-arrested for absconding, he said that although not dogmatic, he held basic Christian principles and so, “It’s in the hands of Jesus.”