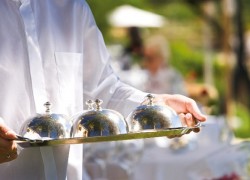 The World’s Most Celebrated Michelin-Starred Chefs are joining Portugal’s 6th Annual International Gourmet Festival, considered one of the best and biggest gastronomical events in the world. The event will be held at the Vila Joya in Albufeira-Guia, Algarve, from January 12–22, 2012.

The festival will honor Portuguese wines, local vineyards, area hotels, food, artists, designers and all the undiscovered beauty Portugal offers, attracting visitors from throughout Europe and the United States.

Vila Joya’s Chef Dieter Koschina – awarded with two Michelin stars for his work at the on-premise restaurant – will welcome New York City chefs Laurent Gras, April Bloomfield and Shaun Hergatt, who will represent the United States at this year’s festival.

Over 20 of the world’s most celebrated chefs from France, Italy, Switzerland, Germany, the United Kingdom, the Netherlands, Finland, Sweden, Canada and Portugal will also participate, each presenting a tasting menu combined with several.

“With each of these superstar chefs presenting his or her tasting menu combined with several wine pairings, the festival is a true gourmand’s dream. This is the only gourmet event where can you experience the work of Michelin-starred chefs from around the globe. And the same chef never appears twice, an added bonus for repeat visitors,” said Executive Director and festival organizar Gebhard Schachermayer.

The late Claudia Jung will be honored with a special tribute. The founder of Vila Joya in 1982, she died in 1997. The festival takes place on the anniversary of her passing.