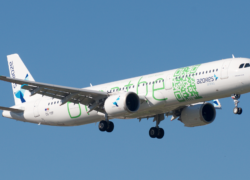 In a prepared statement, SATA Air Azores has confirmed that the company’s Aircraft Maintenance Technicians will be on full strike December 21, 22 and 23.

The Aircraft Maintenance Technicians have been on partial strike since October 28, while negotiations have been held in an attempt to bringing the parties to an agreement.

However, “In the absence of an agreement concerning the claims submitted, the SITEMA and SINTAC Unions have issued a second strike notice, for the full twenty four hours of December 21, 22 and 23.”

According to the statement, it is expected the stoppage will affect the inter-island connections operated by SATA Air Azores,. Therefore, the airline advises travelers, who have booked flights on the strike dates, “to change the dates of travel to days before or after the planned strike period.”

Because “mandatory minimum service” was not yet known, SATA Air Azores has suspended in advance the flights scheduled for the strike days in order to direct customers to alternative flight connections.

In view of the strike and its duration, the airline is taking all necessary actions to facilitate the “re-accommodation of travelers and thus ameliorate any inconvenience that may occur.”