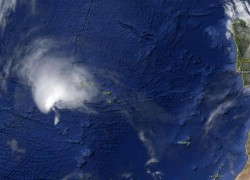 The Government of the Azores has declared a state of emergency for Monday, following warnings of a complex weather system developing, involving hurricane strength winds as well as coastal flooding and erosion.

According to local forecast reports, the Eastern islands of São Miguel and Santa Maria will take the brunt of the hit.

Civil protection services were ordered Sunday to operate under a state of emergency ahead of the storm. It appears as though strong wind and heavy rain will be the main threats with this system.

The Portuguese Institute of Sea and Atmosphere (IPMA) has emitted a “red alert”, the most serious of a four-scale system, considered a meteorological situation of extreme risk, involving thunder storms, hurricane strong winds of 130-150 k/hour and sea waves reaching 10-15 meters high.

As a precaution, schools will be closed for the duration of the storm while the population was advised to stay out of harm’s way. Flight cancellations in and out of local airports are expected due to the storm.