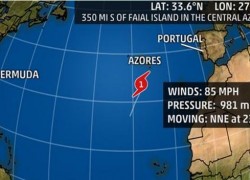 The Government of the Azores has declared a state of emergency for Friday, January 15, following warnings that tropical storm Alex,  a ‘category 1′  hurricane, is expected to hit the islands hard. Hurricane-force winds of 160-170k/hour and heavy rainfall are expected.

The Azores Meteorological Service has issued a “red alert” warning for the islands of Faial, Pico, São Jorge, Graciosa, and Terceira which form the central island group.  Tropical storm warnings are also in effect for the eastern islands of São Miguel and Santa Maria.

Tropical storm conditions are expected to begin in the Thursday night.  A “red alert” is the most serious of a four-scale system, considered a meteorological situation of extreme risk.  As Alex moves through in the Azores, extreme weather conditions may trigger life-threatening flash flooding, mudslides, wave surge and coastal erosion.

Tropical storm Alex first formed as a subtropical storm on Wednesday afternoon. This is just the second hurricane on record to form in the eastern Atlantic Ocean the month of January. The last hurricane that formed in the Atlantic during January was in 1938. The Atlantic hurricane season officially runs from June 1 through November 30.

Civil protection services were ordered to operate under a state of emergency ahead of the storm.  As a precaution, government offices and schools will be closed for the duration of the storm while the population was advised to stay out of harm’s way.  Flight cancellations in and out of local airports are expected due to the storm.

This is the third time in last two months that the Azores are experiencing extreme severe weather. On December 4 a “red alert” was issued by the Government of the Azores involving a severe weather complex involving hurricane strength winds, thunderstorms, heavy rain, coastal flooding and erosion.  On December 17 the islands were once again placed under a weather “red alert” due to extreme weather conditions.

The Azores (population 250,000) are threatened frequently by hurricanes that usually lose their strength as they move into colder northern waters.