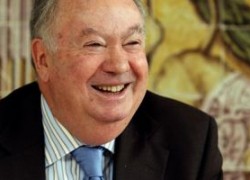 Alberto João Jardim, 68, will be sworn in on Wednesday as President of the Regional Government of Madeira for a 10th term. The ceremony will be held at 5pm local time at the Legislative Assembly (Parliament) of Madeira.

Jardim, the populist leader of the Social Democratic Party (PSD) in Madeira, won the regional legislative elections on October 9, with an absolute majority of 48, 56%, gaining 25 out of a total of 45 parliamentary seats.

Jardim has ruled Madeira for the last 33 years, since 1978, as Madeira’s first and only elected regional leader, after the Region won autonomy from Portugal in 1976. He is the longest-serving democratically elected Portuguese leader.

The next Jardim administration will face enormous challenges. Madeira’s debt is now estimated at staggering 5.8 million-euros (6.7 USD billion). The debt went unreported until an auditing in October by the troika (European Bank, FMI and EU Commission) revealed the magnitude of Madeira’s liability.

Following the revelation, Moody’s credit rating agency cut Madeira’s rating from “B1” to “B3” placing the island’s
debt on negative outlook. The Portuguese Attorney General’s Office said it will investigate the unreported debts.

A meeting is scheduled in Lisbon for November 14 between Alberto João Jardim and Prime Minister Pedro Passos Coelho. On November 18, the regional leader of Madeira will hold meetings in Lisbon with President Cavaco Silva and Assunção Esteves the President of the Portuguese Parliament.

Madeira (population 253,000) became an autonomous region of Portugal in 1976 with its own government and autonomous legislature. The Regional Government includes the Legislative Assembly composed of 47 deputies, elected by universal suffrage for a four-year term; the Regional Government and Presidency, with parliamentary legitimacy, composed of a President, a Vice-President and seven Regional Secretaries, responsible for day-to-day executive operations. The Autonomous Region of Madeira, composed of Madeira and Porto Santo islands, is represented in the Council of Ministers of the Central Government by a representative appointed by the President of Portugal.