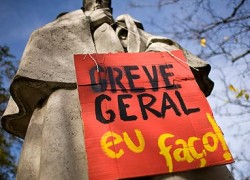 Air traffic workers in Portugal went on strike today for two hours, between 10 am and 12 pm, in the five major cities of Lisbon, Porto, Faro, Ponta Delgada and Funchal, resulting in delays and cancelations of flight services around the country.

Workers have announced that similar strikes are planned for May 4, 11, and 18.  Public labor unions have also called for workers to march in protest on May Day and to join a general strike for May 6.

The protests for May Day are being organized by the two largest national coalitions of labor unions, the CGTP representing 727,000 workers in 81 unions, and the UGT with about 500,000 members in 58 unions.

An estimated 80,000 demonstrators protested in Lisbon, at Avenida da Liberdade, Monday, not to commemorate the 37th anniversary of the April 25th Revolution but to voice their anger.

The workers are opposing government austerity measures being implemented ahead of the June 5 elections.  They are saying that the sacrifice burden is uneven.  Workers expect further tax hikes, salary reductions and cuts on benefits.

Portugal is negotiating with European authorities and the International Monetary Fund for a bailout that is expected to total US$116 billion.  It t is expected to be approved in mid-May just as the country prepares for a snap general election on June 5.