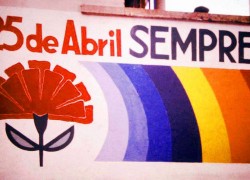 By Carolina Matos, Editor – Since 1974 “Freedom Day” is celebrated in Portugal — April 25 —  as a national holiday to mark the bloodless military coup, supported by the civilian population, bringing democracy and civil liberties to the Portuguese people.

Under the constitution of 1976, which established a parliamentary republic, Portugal has been governed by a constitutional democracy with a president, a prime minister, and a parliament elected in multiparty elections.  The Portuguese constitution was amended in 1982, 1989, 1992, and 1997.

Although the 2010 Human Rights Report has documented some violations in some areas, today Portugal, a member of the European Union since 1986, is a modern democratic state where the Portuguese population (10,632,069) enjoys many civil liberties.  Portugal also has a relatively low rate of violent crime.  According to the 2009 Global Peace Index rankings, Portugal is the 14th most peaceful country in the world.

However, by all standards, 37 years later Portugal is still one of the poorest counties in Europe and of the European Union. Presently Portugal is undergoing political turmoil. Prime Minister José Socrates submitted his resignation last March after his minority government austerity measures were rejected in Parliament by the parties in opposition.  As a result, President Aníbal Cavaco Silva dissolved Parliament and announced early elections to be held June 5.

Portugal is having difficulties in meeting its foreign debt obligations.  According to the latest projections from the International Monetary Fund (IMF) the Portuguese economy is expected to contract to about 1.5 percent in 2011 and 0.5 percent in 2012.

The country is expected to close a deal for a bailout with the EU and the IMF before the June 5 elections.  A team of delegates from the EU and the IMF is currently in Lisbon negotiating with the government the terms of the deal to be sealed by mid-May and estimated at 80 billion euros (US$116 billion).

Currently Portugal is in recession with much of the purchasing power of the Portuguese population weakened by unemployment and high inflation, the cost of living going up, salaries coming down and benefits being reduced.

According to Lisbon based National Statistics Institute (INE), there are 95,400 people under the age of 25 unemployed.  The jobless rate for males increased to 10.1 percent from 9.6 percent, while that for females edged down to 12.3 percent from 12.4 percent.

Compared to the United States, where the median monthly disposable salary averages US$2,793.36, in Portugal the average monthly salary is 60 percent less, down to about US$1,112.58.