Air traffic on the increase for 2011 – Azores 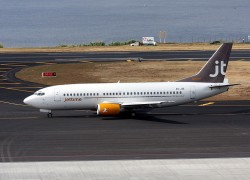 According to a statement by ANA Aeroportos de Portugal, the airports in Lisbon and the Azores are seeing an increase in traffic at a rate of 3.1 percent for the first two months of the year, but that is down 5.2 percent when compared to the first two month of 2010.

Seasonal direct flights from the UK to the Azores islands resumed this past Saturday (April 2).  SATA International will operate flights from either Gatwick Airport or Manchester Airport to Ponta Delgada in São Miguel, every Saturday, for the entire summer season, extending until the end of October.