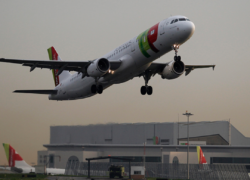 The Portuguese government announced, on Thursday, that it reached an agreement with TAP Air Portugal private shareholders, to hold 72.5% of the airline’s capital for 55 million euros, after a resolution by the Council of Ministers recognizing the public interest of keeping the airline in operation.

With the move, the State has increased its participation in the national flag carrier from the current 50% to 72.5 %, an additional 22.5%.

“In order to avoid the collapse of the company, the government has chosen to reach an agreement for 55 million euros,” the Minister of Finance, João Leão, announced in a joint press conference with the Minister of Infrastructure and Housing Pedro Nuno Santos.

Nuno Santos added that the government will not manage TAP, and that it will appoint a private company to search the international market for a qualified team to administer the airline.

“We will carry out a selection process by hiring a company that, within the scope of its activity, will look for a qualified team in the international market to manage TAP,” Nuno Santos stated, stressing that TAP is too important for the country, therefore too big to fail.

According to the agreement, the State now holds 72.5% of the airline, businessman Humberto Pedrosa holds 22.5%, and the workers keep 5%.

TAP Air Portugal has been under stress, struggling to survive the economic impact of COVID’19. As a result, it has requested State aid to secure its future, appealing to the government for a bailout.

In March, due to the collapse in travel, TAP temporarily laid off around 90% of its employees, suspending its operations almost entirely.

TAP Air Portugal was partially privatized in 2015. The airline was 50% owned by the state (through state holding company Parpública), 45% by the private consortium Atlantic Gateway, and 5% by its workers.

The Atlantic Gateway is led by Brazilian-U.S. airline entrepreneur, JetBlue founder and owner, David Neeleman, who held a 45% stake in TAP. Neeleman is also the founder of Brazilian Azul airline. Under the Gateway consortium, the company was not well managed, even before the current crisis, suffering significant losses in both 2018 and 2019.

Most recently, TAP has resumed some of its international operations in Europe, with flights scheduled to London and Paris, while delaying its plans to launch the new Lisbon-Montreal and Ponta Delgada-Boston services.

Last year, TAP had announced two new nonstop routes from North America to Portugal to include Boston/Ponta Delgada and Montreal/Lisbon. The new routes, to be launched in the summer of 2020, were suspended.

TAP operated around 2,500 flights per week. North America was one of the company’s three main international markets. By the summer of 2020, in total, TAP projected to operate 82 weekly roundtrips from nine gateways in North America to Portugal.

Before the pandemic outbreak, TAP Air Portugal operated from 7 airports in North America, 10 in Brazil, 1 in Venezuela, 16 in Africa, and approximately 70 in Europe.