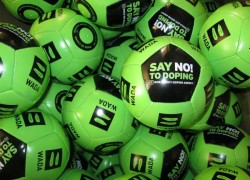 Portuguese was recognized as an official language on the ADAMS system run by the World Anti-doping Agency (WADA).

Portuguese and Mandarin were approved as official ADAMS system languages at a meeting of the World Anti-doping Agency in Lausanne, Switzerland on Wednesday.

Established in 1999, the World Anti-Doping Agency’s mission is to lead a collaborative worldwide campaign for doping-free sports.

Its key activities include scientific research, education, development of anti-doping capacities, and monitoring of the World Anti Doping Code (Code).

The Anti-Doping Administration & Management System (ADAMS) is a Web-based database management system that simplifies the daily activities of all stakeholders and athletes involved in the anti-doping system. Its seat is in Lausanne, Switzerland, and its headquarters are in Montreal, Canada.

Portuguese is spoken by over 200 million people worldwide.